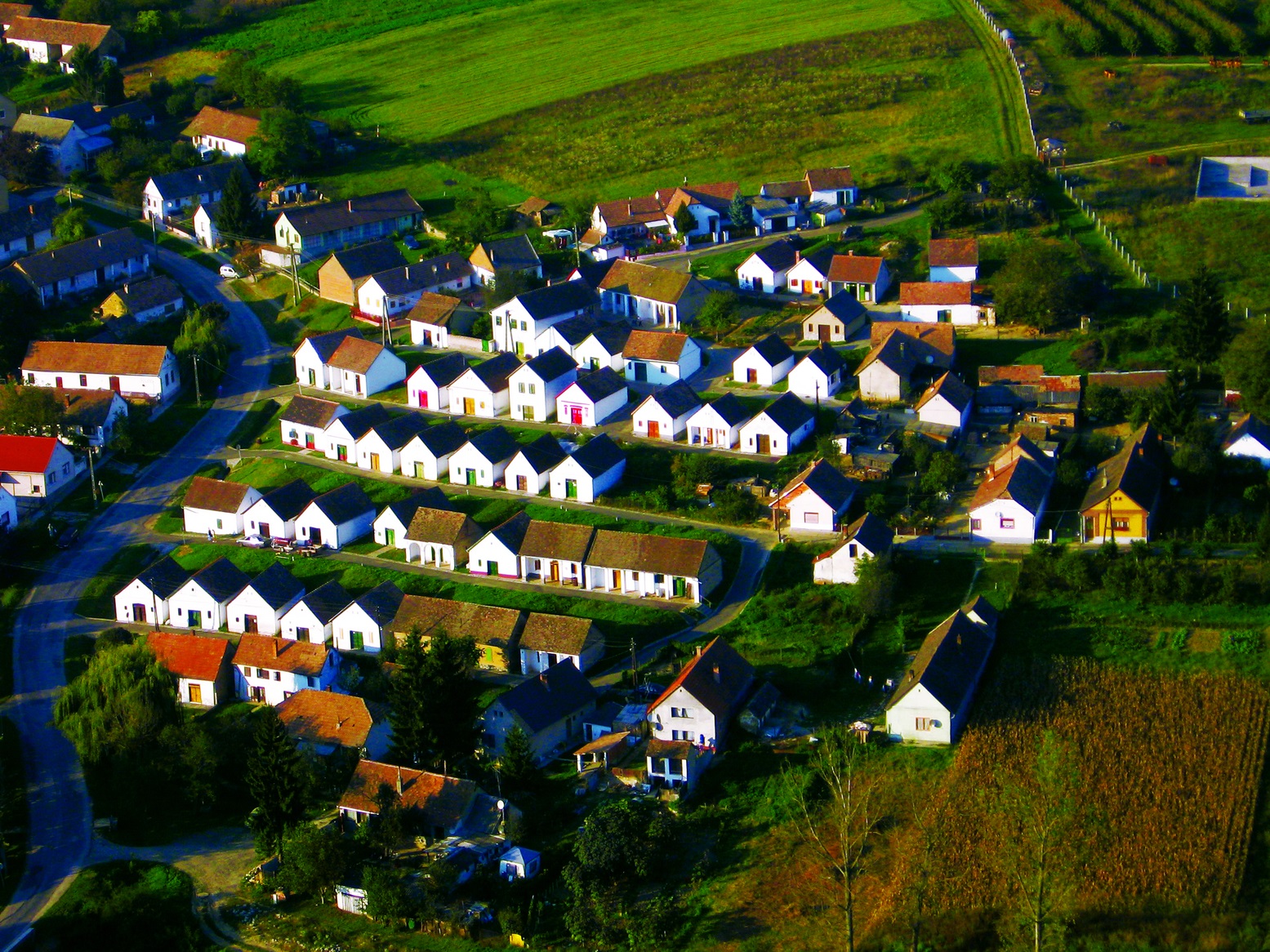 On the southern edge of the village, on a slope overlooking the vineyard, a multi-row cellar village was built.  There are  records from the end of the 19th century that this is a very good vineyard for blue grapes. The National Heritage Protection of the ensemble is justified by its settlement structure, folk architecture, economic history and aesthetic values. It consists of roughly similar elements, the nearly square buildings are typically built with a sloping ridge, but also enrich the ensemble with ridge-parallel ridge and porch designs. Protected as a national architectural monument, the 53 cellar rows of cellars, built in several rows above each other, have a settlement structure, economic history – and at the same time an outstanding aesthetic value. The cellar group, which was built in the beginning of the 20th century, looks like one another but consists of different buildings. In addition to the dominant, simple building blocks with perpendicular roofs perpendicular to the strata, there are also press houses with curved, arched and pillared porches. 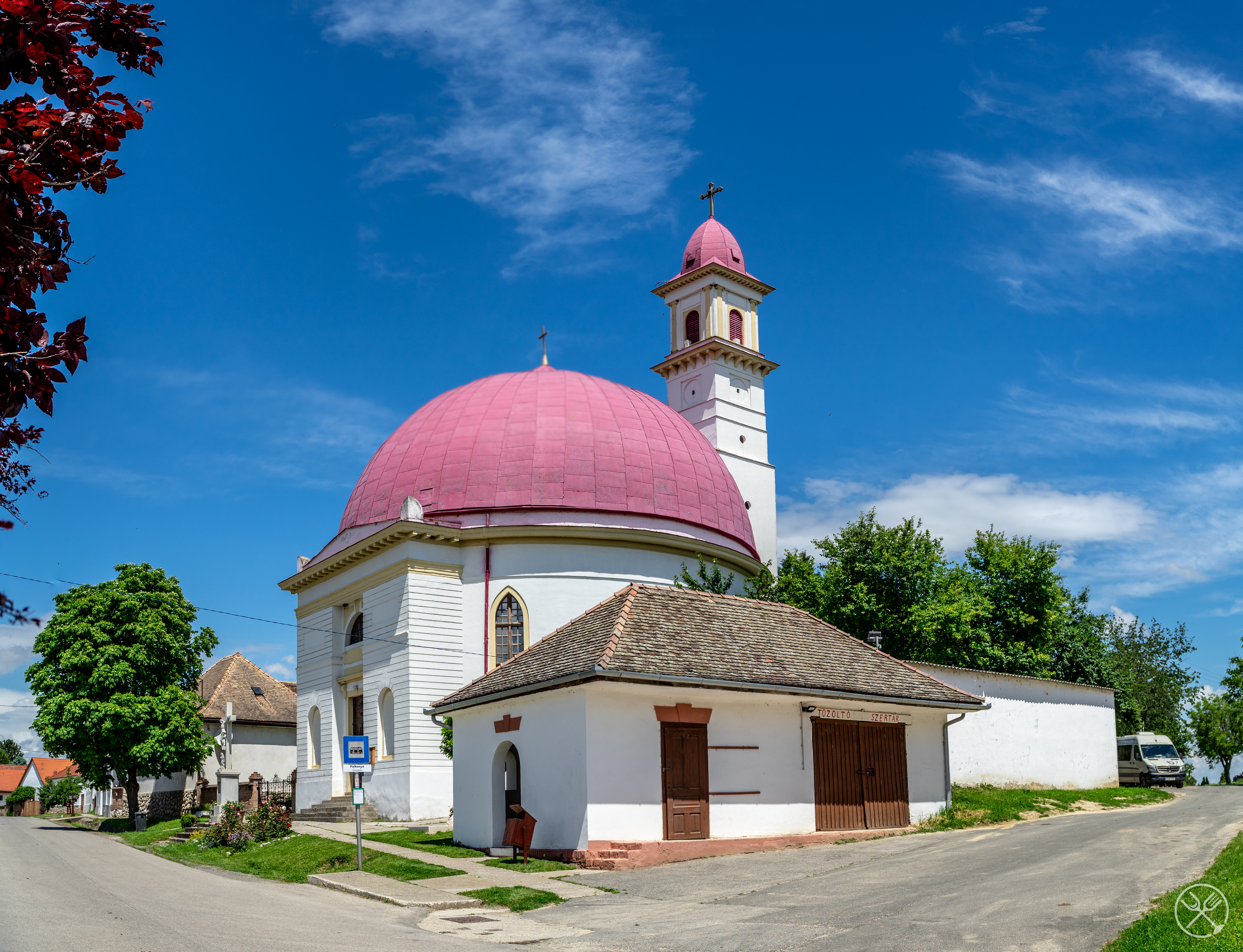 Our Roman Catholic Church was built in 1816 by the Batthyány lordship in classicist style, it is believed to use Turkish foundations, covered with the dome of a free standing church, with its tower opposite the entrance to the sanctuary. The Catholic church of the village was built by the Batthyány family and dedicated in 1816 in honor of St. Elizabeth. The red domed church, which can be seen from far away, is one of the most beautiful examples of the rounddome churches in Hungary.  The church with excellent acoustics regularly hosted various choir performances like European Winesong Festival.

The construction of the first church was completed in 1771. It was a small chapel that was built by the local people themselves, without any help. The construction of the chapel was led by József Guldán, master of stone in Siklós. From the village, Ferdinand Jobst was in charge of the work. The chapel was consecrated by priest Charles Pritzelmajer. In 1782 a small bell was cast for the chapel in Pécs, and in 1793 a large bell was brought from Vienna. Unfortunately, the first bells are no longer here. As the population grew, the chapel soon became small, so at the beginning of the 19th century the landowner János Batthyány built this unique neoclassical church. It was consecrated by Antal Juranics, canons of Pécs in 1816, in honor of Saint Elizabeth. The beautiful round dome covered with tin can be seen from afar. The inside diameter of the round church is 13.30 m and its height 18 m. The four Gothic windows are three feet wide and eight feet high. In the past there were two side altars besides the main altar. Above the main altar is a huge painting depicting St. Elizabeth, who distributed the alms.

Above the dome is a fresco depicting the Bethlehem scene. Above the altar in the dome is a fresco depicting the Trinity. In the circle at the bottom of the dome, each of the five symbols represents one evangelist. The statue to the left of the altar depicts the Madonna. It was founded by the Blum family as a result of teacher son escaped from a ship exploded on the Danube while travelling with his students. The statue to the right of the altar depicts the child Jesus. Above the main entrance is the choir with the organ. The main entrance to the church faces the street and the tower stands behind the church and faces east. The tower is 38 m high and its cap is made of red painted tin. The two bells of the chapel were placed here, and a third one was cast in Pécs in 1844. This is still in the tower today. It weighs 448 kg. During the First World War, the two old bells were defrosted, melted and processed for war purposes. In 1926, the village again purchased a small bell in Pécs. It weighs 64.5 kg. It was used as a school bell until the Second World War. There are two small rooms to the right and left of the tower. One has the sacristy and the other has a staircase to the tower. In 1958 the dome cover was restored and the red plates were replaced with gray. The cap of the tower was renovated in 1962. In 1961 the church was renovated and painted. The altarpiece and the two murals were restored by Ernő Gebauer, a painter from Pécs. The symbols were painted by József Őry. The side altars were demolished during the renovation. At the same time, a sacred tomb was erected under the altar. The church was declared a national monument in the 1980s 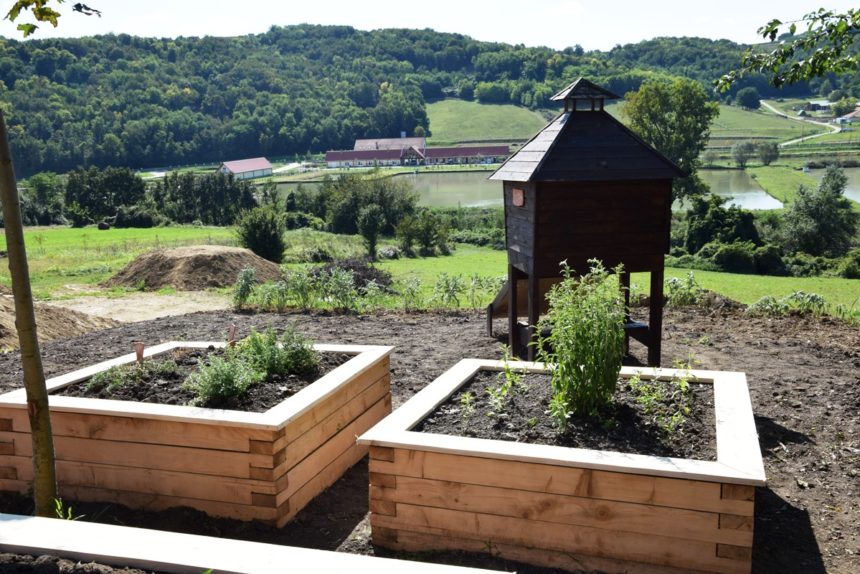 The Community Herbarium and Educational Center aims to showcase the natural herbs, spices and unique butterfly species due to the unique Mediterranean climate with the help of local people (adults and children) of Palkonya. The purpose of the presentation is to carry out tasks related to cultivation, care, harvesting and drying at community level, to educate the population about the environment, and to familiarize with the practical uses of herbs in everyday life. The mission of the project is to rediscover the treasures of nature and educate our children on plant production and natural ingredients. We built the Community Herbarium in 2016 with the help of the Danube-Drava Cement Green Solution competition. The Herbarium is made up of herbs and spices in tall beds, the varieties of which are marked with ceramic plates. The project consists of a pavilon and a drier with drawers. The Herbarium is open to everyone, as we not only see the plants but also the panoramic view of the lake and a small playground for visitors. Address: Palkonya, Fő str. 35 behind the building. 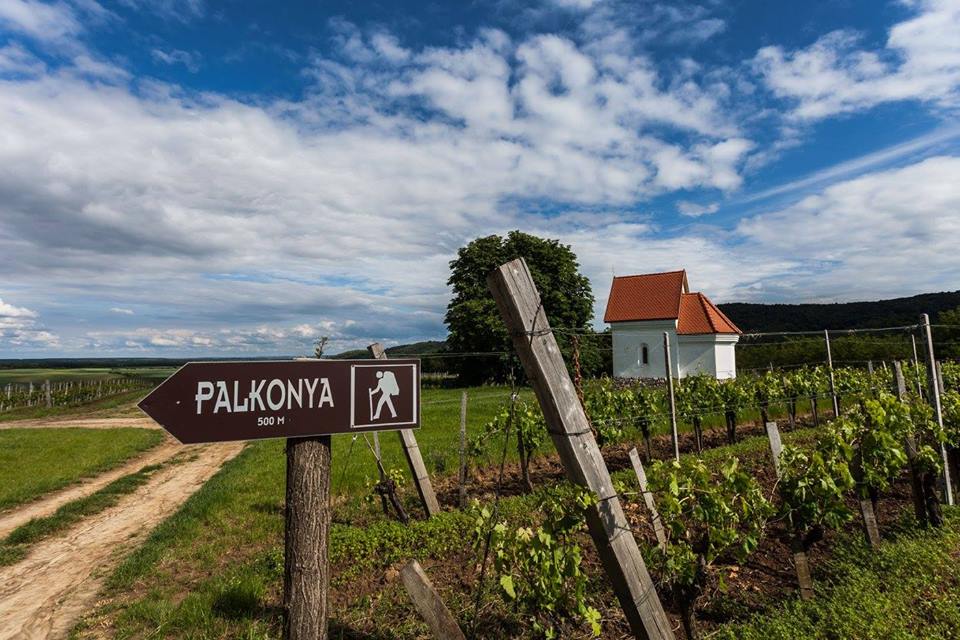 Our Chapel was built in in 2006-2007 on a private place, whose owner is Tibor Somogyi winegrower and winemaker.  This tiny little chapel is made of natural materials: local natural stone, hand-sown brick, beeswax wall insulation, burnt clay tile cover, mortar. The location and axis of the building were also mapped using traditional medieval methods: wand (radius) positioning. We regularly celebrate St. Berthalan’s Day at the chapel, where we pray together and sing at the sunrise. On this day, and only on this day, the light of the rising sun strikes the light and illuminates the altar. Come celebrate with us!

We focused the chapel on August 24, St. Berthalan’s Day, when the rays of the rising sun illuminate the sanctuary and the image of St. Berthalan, helping us to find enlightenment in us. Just as a sick body can be healed by treating acupuncture or acupressure points, this little spot on the map hopefully contributes to the revival and proper operation of the home body, the Carpathian Basin. Thanks are therefore due to the builder, Tibor Somogyi. Serve as a good example. Thanks are also due to the donators and local people. We are grateful for the work of Lajos Somlósi Radiesthetist, Győző Somogyi painter, János Pap stonemason, István Doszpot carpenter and Sándor Fajtai tin master. Among others, György Kiss, restorer, ceramist Judit Major, Hanna Foster, and the designer participated in the rendering. The furniture and the sanctuary door are works of Gy. Zsigmond Hajda. Artist Gábor Pap and the advice of József Molnár V. helped the depiction of the photographer. We thank the Idea owner, her organization and her constant love for the chapel † Becker Leonora. The chapel was designed by Antal Grátz architect, assisted Zoltán Nagy.

The architectural character of the settlement is characterized by several architectural elements that are recurring in several places originated from the German settlements. Preserving these enhances the village’s specific appearance. Such a simple porch with straight-walled masonry pillars, colored carpentry work, colored glass or apartment entrance. Characteristic street views are provided by the previously dominant, but still present, large number of solid masonry fences that chained the residential buildings and followed the comb or saw tooth installation. There are street wrought iron fences and gates in many places, the details of which show the craftsmanship of the craft, which is an asset to be preserved. For details on protecting protected buildings, see the current Municipality Protection Order.

Next to the church, the road leads to the cemetery. The Catholic, Reformed and Jewish cemeteries once stood side by side but separate. This is the name of the descendants, the inhabitants of the village, who preserve the beautifully crafted gravestones of the 17th century stone carving masters. By preserving the dwelling stones of the ancient tombs in their present place, a park of grace may be established or a stone repository may be established around the funeral home. 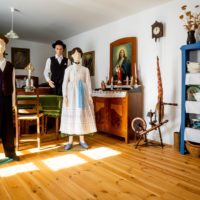 Furnished from the material heritage of the families living in the village, the authentic Swabian room authentically presents the details of the former village life. It can be visited by a professional escort upon request. Contact: Deutschné Ili +36 30 858 6930